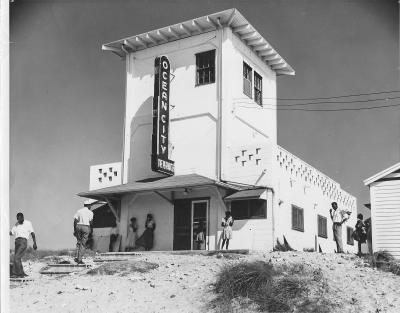 After World War II, Edgar Yow, an enterprising white Wilmington attorney and former Wilmington mayor purchased six miles of beach property on Topsail Island.  As mayor, Yow realized that in the Jim Crow era there was a need for beachfront recreational opportunities for African Americans.

Yow, called upon Dr. Samuel Gray to discuss his vision.  Dr. Gray referred him to Wade Chestnut and his siblings Bertram, Robert and Louise Chestnut Thompson.

In 1949, stock was sold and the inter-racial corporation, Ocean City Developers, Inc. was formed for ownership of the land. The corporation was filed with the NC Secretary of State on September 19, 1949, and divided the beach community into business and residential areas.

Wade Chestnut conceived the idea of naming the one-mile tract of land, three miles north of Surf City that stretched from beach to sound, Ocean City, as it is presently called.  The first homes were built in 1949, followed by a restaurant, named Ocean City Terrace in 1953.  The restaurant was constructed from an abandoned Navy missile observation Tower, now recognized as Operation Bumblebee Tower 6.  Streets in the community would bear the names of community family members and famous Black Americans.  A motel, the Ocean City Motor Court (11 one room and 1 three room apartment) was built in 1952.  By 1954, there were 15 homes in the community, but with the arrival of Hurricane Hazel, the majority (12 of 15) of homes were destroyed.

In 1955, Camp Oceanside was established and was the first Episcopal camp for Blacks in the Diocese of East Carolina.  St Mark's Episcopal Chapel, as it was called before it was named the Wade H Chestnut Memorial Chapel was built in June 1957.  Following the completion of the Chapel, four buildings were added to Camp Oceanside.  The Reverend Edwin Kirton, rector of St. Mark’s Episcopal Church in Wilmington was director of the summer camp and was instrumental in establishing the camp.  The camp was held for 25 years in Ocean City until it was dissolved in 1985.

By 1979, Ocean City grew to about one hundred homes of African American ownership.  In August of 1983, Ocean City Developers, Inc., was dissolved and the Ocean City Beach Citizens Council was established to manage community affairs.

A large number of homes were destroyed during Hurricane Fran and were not re-built.  The close-knit community, became a part of North Topsail Beach in 1990.  The town of North Topsail Beach installed commemorative street signs to mark the historic community in 2012.  The Ocean City Community was inducted to the Jacksonville-Onslow African American Heritage Trail in 2014 and to the North Carolina Civil Rights Trail in 2022.

For a detailed history visit www.oceancitync.com