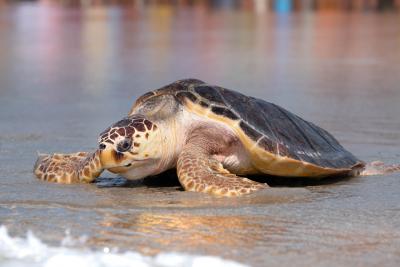 One of the many things that make Topsail Island special is its affinity toward sea turtles.  The island is one of the most northern nesting sites in the world where loggerhead turtles come annually to lay their eggs. That, along with the only sea turtle hospital in North Carolina, The Karen Beasley Sea Turtle Rescue and Rehabilitation Center, makes the island an instant hit among sea turtle enthusiasts of all ages.  Weekly Turtle Talks are held at Town Hall on Tuesdays from 9am to 10am from the first week of May through the last week of September.  These are free to attend for residents and visitors of all ages.

Here along the NC coast, the nesting season runs from mid-May through August.  Volunteers survey the 20+ miles of coastline along Topsail Island each morning during the nesting season to identify sea turtle tracks and nests. It is normal to have a varying number of nests each year.  Female loggerheads come ashore to nest 3 to 5 times during a nesting year.  Each time she deposits an average of 120 eggs; known as a clutch.  The eggs will incubate for about 60 days. When it is hatching time, the baby turtles will emerge together and race to the sea.  They have many obstacles to contend with.  Weighing in at about two ounces, they must outrun the ghost crabs, shore birds, and wild and domestic animals looking for an easy snack. Once in the water they must hide from predators such as birds and fish.  It is estimated that only one in 1,000 survives the first year and only one in 10,000 survives to adulthood.  At that time the females will return to the beaches where they were hatched to lay their eggs.  The cycle then begins once again.

As tough as turtles might look with their armor like shells, they can actually be quite vulnerable to injuries.  Cold snaps, sharks and run-ins with boats and fishing nets are just some of the hazards that sea turtles face.  That is where the sea turtle hospital comes in.  At The Karen Beasley Sea Turtle Rescue and Rehabilitation Center, volunteers nurse back to health any turtles that may be ill or injured.

To report an injured or dead sea turtle on the beach, please contact a member of the Topsail Turtle Project at 910-470-2880 at any time for immediate assistance. 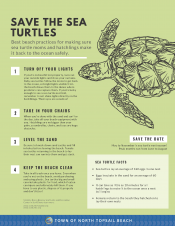 WHAT CAN YOU DO TO HELP?

● Turn beachfront lights OFF after dark. Sea turtles are phototactic, which means light attracts them. Hatchlings will move toward the brightest light source, traditionally moonlight and stars reflecting off water to move toward the ocean.

● Use only a red beamed light when walking on the beach at night, as white light is distracting and disorienting.

● Flatten sandcastles, fill holes and remove any obstacles on the beach at the end of each day.  This includes chairs, tents, umbrellas, games, etc.

● Observe a nesting turtle from a distance.

● Touching a nest or hatchling is against federal law, even if hatchling is in distress or not crawling toward the ocean. 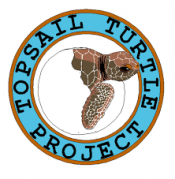