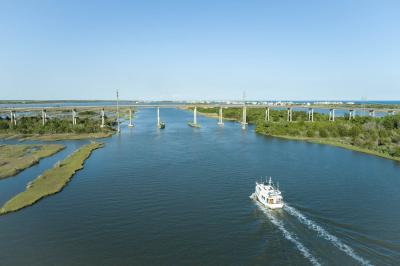 North Topsail Beach is the perfect place to get away. The town’s motto - Nature’s Tranquil Beauty – says it all. From breathtaking sunrises to spectacular sunsets, from beautiful sandy beaches to maritime forests, North Topsail Beach truly is an island paradise.

The town is located on the northernmost 11 miles of Topsail Island with Surf City adjacent to it and Topsail Beach on the south end of the island. Each town is unique in its own way, with North Topsail Beach being known for being laid back and peaceful with an abundance of natural treasures. Wildlife, such as dolphins, sea turtles and shorebirds are regulars to the town and you might even catch a glimpse of more elusive creatures such as bald eagles, and an occasional alligator in the backwaters.

If you want to step back from the crowds, there’s plenty to do in North Topsail Beach. Along the shore you can stroll, sunbathe, swim, search for shells and ancient sharks’ teeth, go surfing and enjoy a plethora of watersports. Sportsmen will also enjoy fishing from the ocean pier, beach or boat. Under the high-rise bridge where you enter the town from Sneads Ferry, the North Carolina Wildlife Commission maintains a boat launch with a site for power boats and personal watercraft, as well as another launch for canoes, kayaks and paddleboards.

The town has two parks that also have launch areas for canoes, kayaks and the like. The Rodney Knowles Park on Island Drive offers a sound side observation deck as well as a picnic area. The Richard C. Peters Park on New River Inlet Road is the larger of the town parks and has a playground, nature trail, picnic area and two sound side piers. If you want some exercise, the park also has tennis, volleyball and basketball courts. Additionally, a multipurpose path runs from Surf City on Island Drive all the way to the Richard C. Peters Park.   It’s a perfect place to bike, jog or stroll.

Onslow County maintains three beach access areas with bathrooms and showers. Two of the accesses are on New River Inlet Road and the largest of the three is on Island Drive. If you want to get away for a day, the town is conveniently located between the cities of Wilmington and Jacksonville.

North Topsail Beach is very proud of its history. The island was used by the military during World War II and was critical in the development of the ramjet engine. When the war was over land on the island was available for private development.

In the late 1940s Wilmington attorney Edgar Yow bought property on Topsail Island. His goal was to establish an oceanfront community where Blacks could own homes, which was not easy to do during those days of segregation. Yow, who was White, formed a joint venture with some of Wilmington’s prominent Black professionals in order to create a corporation to develop the property. Dr. Samuel Gray and members of the Chestnut family partnered with Yow to form Ocean City Developers, and a one-and-a-quarter mile tract of land became the Ocean City Beach community. It was the first residential beach community in North Carolina where Blacks could own property. In 1991 when North Topsail Beach was incorporated, it encompassed the Ocean City Beach community.

One of the state’s first Civil Rights Trail historical markers was recently dedicated in a ceremony with residents and visitors, as well as community and town leaders in attendance. Ocean City Beach also hosts an extremely popular Jazz Festival each year.

With its relaxing, laid back atmosphere, proud history and a multitude of things to see and do, North Topsail Beach truly is an island treasure. It is a great place to be whether you are looking for a place to find your perfect vacation rental or want to own your own piece of Nature’s Tranquil Beauty.